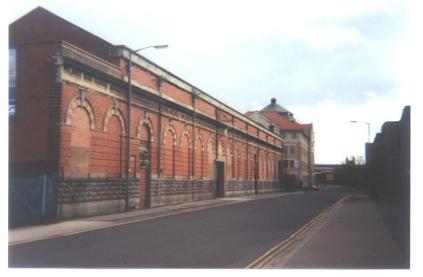 When I first began travelling to Bristol on the train, I'd often walk along Temple Back to and from the city centre record shops. I was always curious about the Central Electric Lighting Station, which appeared to be entirely disused and almost falling down. Over the years I learned more about how the city fitted together and always regarded this building as a sort of central point for me. Then one day, probably in 1995 I think, I noticed signs on the end walls of the building advertising a new office development. A week later I returned with my cheap and poor quality camera to take a picture of a building I thought would soon be gone. Note also how the view towards the grand entrance to Temple Meads station is uninterrupted. The same view now would of course be obscured by much of the Temple Gate development.

Central Electric Lighting Station, Bristol, c.1995
But it didn't disappear. Five years later I was a reluctant commuter to an office in Portland Square, and sometimes I'd walk back to the station this way and still see the building and the sign advertising the development. The sign was fading fast, and I hoped this resilient building would outlive the developer's plans.

Tonight, on a bus into the centre to visit my mother in the Bristol Royal Infirmary I glanced across from Temple Way to see demolition in progress. At first I couldn't place the building they were working on at all. Only the southernmost wall remained, and it looked quite different viewed from the interior. Gradually it dawned on me that my hurried trip up to Bristol twelve years ago may have been far too hasty, but was entirely necessary. Some searching today has located the new plans for the site and the south wall will remain, albeit cut down and shorn of much of it's interesting detail. So my rather grainy, dim photograph is suddenly significant. A fine building bites the dust.