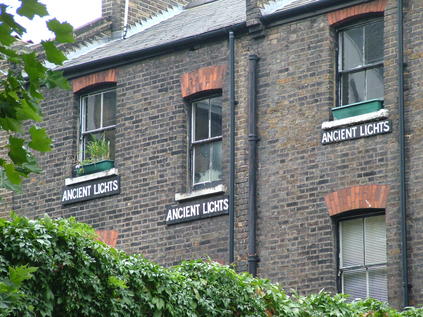 Up early, a quick but fairly sizable breakfast, and out into the cool clear morning. This is the first time for a long time that I'd been in London purely with the purpose of walking. Being much less fit that before, and having very little energy after the last few weeks, I was a little apprehensive. I hadn't planned a great deal at all, but with books and such loaded into my bag I planned to see where things took me.

The first target was New River Head where Myddleton's artificial watercourse reached its goal, not far from the mythical Penton Mound. Started with a gentle walk along Doughty Street and skirted two sides of Mount Pleasant - one of which I'd not passed along before, a tumbledown street of properties commandeered by the Post Office to store vehicles and trolleys or just simply buldozed for car parking. The street was called Phoenix Place, but was clearly not in any way in the ascendent. Along Exmouth Market, watching the street wake up and the bleary-eyed post-coital couples looking for excuses to part in the coffee shops. Soon found myself on Amwell Street, named for the springs at the other end of the river.

It appeared someone had forgotten to tell Thames Water that they'd be taking part in the event, because nothing much was 'open' at New River Head. Found my way into a small commemorative garden at the rear of the site where a number of other disappointed visitors were milling around. A resident from nearby flats involved herself, and gave a shaky and fairly inaccurate history lecture to all present. Throughout this she referred to the river sneeringly as 'it', like there was some personal grudge. I left to explore the rest of the area, and to attempt entry to the main office. As I dithered on the steps, the same native appeared and urged me to go in. I did, if only to escape this increasingly sinister presence. Directed to the Oak Room, I spent a few moments examining its impressive but somehow incongruous opulence before leaving. As I passed the security desk, the native was leaning over, giving the security guard a good dressing down. I slunk by, and out into the street.

My next location was the Grand Priory Church of the Order of St. John in St John Square. I made good speed through Clerkenwell and arrived just in time for opening. Again, the staff didn't. Waited with an increasing crowd of Open House guide toting people in various degrees of leisurewear. There was much talk of 'doing' this building or 'ticking off' that. The whole event was starting to sour for me. It was now a game of architectural bingo which didn't sit well with my mythologising of the city at all. Almost left, but the doors finally opened, and I'm pleased because otherwise I'd have missed an interesting and calming oasis, with an ancient crypt. Most interesting discovery though was the line of housing declaring 'ancient lights' rights to unimpeded window views which overlooked the cloister.

Here I took a coffee break. My plan had been to head south and into the City, checking out whichever churches and Livery Halls crossed my path. I'd likely find myself in some old haunts, but this only added to the fun. However, my little elitist hissy-fit at the Grand Priory Church was still with me. A change of plan was in order. So I set off, via Smithfield and through the gatehouse of St Bartholomew the Great - oldest of the city churches in many respects, dating from 1123 or thereabouts. The interior was quiet, reeking of fresh flowers and the dust of replacement floorboards. 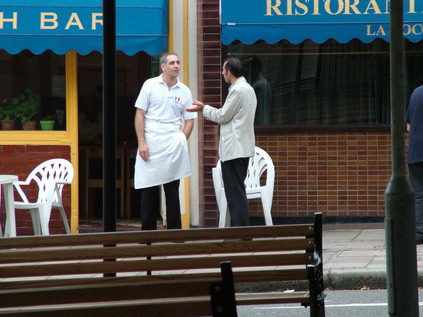 Clerkenwell Green continues to be a site for discussion and oratory
I soon left, passing Betjemans home in Cloth Fair before skirting the City via Aldersgate and London Wall. Admired the ruins of the wall near the museum before pressing on to Liverpool Street. Noted the huge queue for access to the Great Eastern Hotel as in the past two years, and realised that for many Londoners this was just a means of seeing into the corridors of power and wealth. Whether it was a brief glimpse of a top-class hotel, a masonic temple or the Foreign Office, it all led back to the snubbed Cockney entering the sphere of the cultured and refined. I've no doubt there were many wandering the City with a genuine interest in interior design, architecture or history - but I continually bumped into people who seemed more concerned with quantity of visits than quality of buildings. I couldn't continue with any sort of plan now. 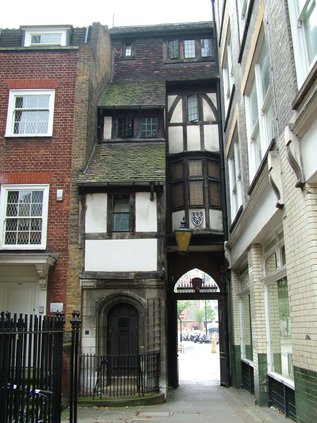 The Gatehouse at St Bartholomew the Great

So I didn't. Having taken on board refreshments I struck out east. Over Bishopsgate and along beloved Brushfield Street with Christ Church, Spitalfields towering over more recent monstrosities. I thanked it's cold white stone for still being there, year after year. Now into Fournier Street, and then Princelet Street. No need to join the queue to visit No.19 again, but I paid my respects to Rodinsky, the mysterious walker of London pathways who had lived above. I'm certain his legend still brings these crowds, who are just as disappointed as I that the room is not open. But for me, the starry ceiling of the hidden synagogue was enough to astound and startle. Further east, deeper into Spitalfields. Over Brick Lane and into Greatorex Street. Sudden calm. Happy family groups walking to the market, to pray or just to be out on a fine warm day. The streets radiate heat back at me, and I realise for the first time that my feet hurt.

Rather unexpectedly I'm cast into the roaring tide of Whitechapel Road. Buffetted around the pavement at first, before I find the rhythm of the crowd and dodge my way further east. I'm tempted by Durward Street, just because I'm sure I once read of its association with the Ripper myth - perhaps as the only street not to be renamed after the events? I'm not a great student of the Ripper cases, but the idea of continuity and resistance in the street name not being changed appeals to me. In any case, Durward Street is now a featureless minor road skirting a new housing scheme and with a huge fitness centre along much of it's length. The entire opposite side is taken up by the Underground lines heading into Whitechapel Station. Back in the melee I moved fairly freely between market stalls and street furniture, desperate to cross to examine the rather bland edifice of the Royal London Hospital. Having recently read Iain Sinclair's 'Radon Daughters' I was curious. Clearly it is vast, labyrinthine and disconcertingly old and tumbledown. Its also a hospital, which for me creates its own difficult resonance - I used to suffer a terrible phobia of the places, and only a career on the very fringes of the NHS freed me from it. I don't quite manage to link into Sinclair's more sinister or political views, despite the crowd of Special Brew connoisseurs populating the steps. The site of the mound or of the original White Chapel now hosts a tangle of undergrowth and several portakabins, none of which appear to be in regular use. I swing south again into New Road. More hospital, it's straggling departments and impedimentia reaching far along this rather dull and menacing street.

I'm out on a limb now, geographically and culturally isolated. I continue south knowing that once over the grim crossing of Commercial Road I'll soon find the twin eastward ways of Cable Street and Ratcliff Highway - both have their shameful pasts and billboard mounted futures. On the corner of Commercial Road, an elderly man with his Open House guide is being directed east by a local. I'm pleased to see people heading out here to the forlorn churches and industrial heritage of the east. I head part by instinct and part by compulsion to St George-in-the-East. I've not been here since 2004, despite a walk almost getting me here once. The church stands white and imposing in a deteriorating scene of chaos. Monuments decked in graffiti, where angels have acquired felt-tip genitalia. The entire place teems with litter and drowsy wasps. I make a phonecall from here, because at least it's quiet and isolated. I feel almost comfortable, and its hard to move on when the time comes. Onto the Highway, and a brief detour through singularly unimpressive Swedenborg Gardens - again a misread literary location. I turn north again onto Cable Street and Royal Mint Street, watching the Docklands Light Railway get swallowed by the earth before plunging back into the swell of the City.

At The Monument I once again pause to regroup. My feet are disintegrating and its a fair way back, even by train. I develop a strange urge to complete my proposed St George-in-the-East to St George Bloomsbury walk, which didn't quite make it. So, now hobbling on a blister I strike out - Cornhill, Holborn - passing the more traditional sights as quickly as my legs can now work. Beside me, pensioners dawdle and eye their guidebooks. Soon enough I find myself at the southern end of Southampton Row. Now barely lifting my feet to walk, I make a frenzied skirt of the Museum area. I can't find St George Bloomsbury. More accurate, I know where to find it, but I'd underestimated how hard it would be to get there. Dejected, but still exhilarated from my 'walking off the map' I drag my bleeding stumps home rather than trying to find a disappearing church, coincidentally passing the Swedenborg Society on route. Food, beer and sleep beckon - but a pair of new feet would do nicely. Despite my hunger, thirst and pain I'm secretly very happy with my wander away from the Open Sites. Perhaps the occasion means that prying eyes and CCTV are looking elsewhere, so Open House really does provide me with the freedom to wander the city? In which case, I'll see you next year...