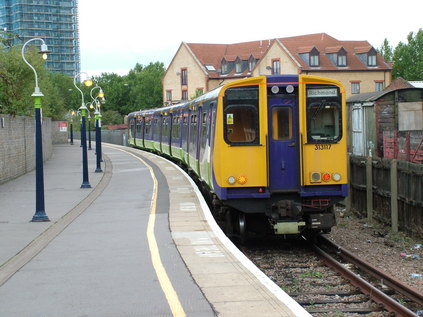 Another week of strange ups and downs, with a general feeling that we're making progress. So another weekend where I want to get out and about, but feel like sleeping all the way! Today's trip was another track bash in the South East. Since First Great Western introduced the Firstminute fares, its been possible to get fairly good prices for longer trips via-London. There was a sense of urgency about today however, as the section of the North London Line from West Ham to North Woolwich is scheduled for abandonment during September as the DLR now duplicates the route to a fair extent. I've used the NLL a lot over the years, but quite never made it to North Woolwich. So, despite feeling like I needed to sleep, another early start on 2M02. Minor trouble at Temple Meads requiring us to swap sets with five minutes to spare, as the doors stubbornly refused to release on the original HST. Out about five late on 1A07 , but still achieved an on-time arrival at Paddington. It took forever to crawl around to Tower Hill on the Circle line for some reason. There seemed to be some big gaps in the Circle service today, which were still pretty bad on my return trip.

Made it to Fenchurch Street with only a few minutes to spare before departure for West Ham at 10:30. I could have done this part of the journey entirely on the District Line, but I really enjoy setting out from here over the City - with Hawksmoor churches towering out of clusters of rather drab housing blocks in Shadwell, Ratcliff and Limehouse. A fairly short margin in my change at West Ham. I forgot what a hike it was to the North London Line platforms, and set out at a dash to make it on time. The service from Richmond appeared dead on time, and whilst not full there were still a fair number of passengers on board for the last leg of the journey down to North Woolwich.

Silverlink's 317117 waits time at North Woolwich
The line here runs alongside industrial roads and through some fairly bleak landscape. Occasionally, a curious streetcorner pub would appear between the warehouses and new-built industrial units - still apparently open, and I imagine supported entirely by local workers. A plunge into tunnel under the docks, resurfacing in Silvertown. A strange frontier-town feel to Albert Road which seemed long since abandoned. A fair traffic of passengers off the train though, indicating that people still live here braving the curious smells of the Sugar Refinery filling the air when the wind is in the right direction, with an occasional but strong hit of the massive sewage works at Beckton. Finally the train snaked into North Woolwich with its impressive station building - now a museum, which perhaps as expected was closed. Took a short walk - thought about the ferry, but that's for another trip. Back on the train to West Ham.

Arrived in a heavy rainstorm and watched the fairly well-loaded trains come and go for awhile. My own train, the 11:38 to Shoeburyness via Laindon was equally busy, and as we sped through the flat marshy land on the border of the estuary in warm and thundery conditions, I confess to snoozing for a while. By the time I woke, the sun was making a showing, and I enjoyed the wide empty views with occasional glimpses of the river - even if traitorous placenames like 'Leigh-on-Sea' tried to claim otherwise! I did this trip many years back - just as far as Southend Central, and I don't remember much except the aging rolling stock and the accents of the locals boarding and alighting. At least they have new rolling stock!

With the train almost empty at Southend, pressed on to Shoeburyness - the curiously named end-of-the-line settlement which seems little more than a dormitory for Southenders. Crossed the ambitiously named High Street and followed a path beside the crossing gates into a park on the seafront. Followed the railway line for a little way, but soon gave up - I'm not sure what remains at the MOD site at Pigs Bay now the slam-door stock is all scrapped, but I didn't have long before the planned train back to Pitsea and wasn't sure how far it was - or indeed how close it was possible to get, given the owners of the site and the current security situation. The whole place was eerily quiet. I found food in a newsagent and retreated to the station. It was an uneasy sort of place - not at all like I imagined it. 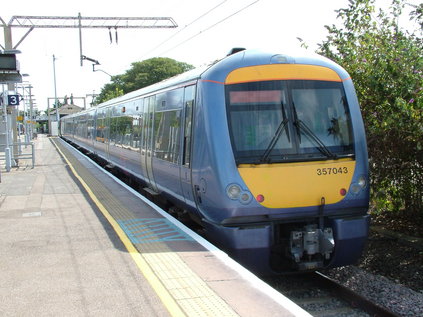 As soon as we set off, and began our all-stops journey back towards the capital I remembered it was the first weekend of the premiership football season. The preponderance of West Ham United shirts was not a good sign. A single four-car unit, already fairly full on leaving Southend was getting increasingly busy. I was pleased to escape from this service at Pitsea and make a cross-platform move onto the service going via Tilbury. I wasn't sure of the exact route - whether we'd travel via Rainham or take the single line through Ockenden wasn't clear. It was all new track for me, but I had a preference for the former. More scrubby marshland and estuary views as we passed through Stanford le Hope and on towards Tilbury. Noted a curious settlement which looked like industrial units converted into dwellings near East Tilbury. After Grays we swung off the mainline, meaning we were heading for Chafford Hundred and that bizarre temple to consumerism - Lakeside. Here the train disgorged its cargo of teenagers repeating Little Britain sketches and chattering in a hybrid of estuary English and misappropriated yardie patois. However we also collected a load of young families with masses of bags, boxes and packages. New stuff everywhere. People screeching into brand new mobile 'phones, already carrying their next model in a Carphone Warehouse bag.

I was relieved to get back to Fenchurch Street. Most of the other passengers bailed at West Ham, onto the tube - probably off to Bluewater for the afternoon session? Out into the strange quiet of a commuter station on a day off. Felt like a walk to shake the Essex dust off my shoes, so set out along Fenchurch Street beyond Aldgate pump and got the Circle line northbound from here. This meant I hadn't quite completed a full Circle today - but that was the least of my concerns. With the Circle still erratic, boarded a Metropolitan train for Uxbridge which had clearly been stabled for a fair while. Startled a pigeon which flapped around inside the train, making me look ridiculous as I ducked and swerved to avoid the skyrat! Passed hordes of passengers waiting for a Circle train at every station. Lazily changed at Great Portland Street to avoid the stairs at Baker Street, and caught a following Hammersmith and City train which unknowing passengers had clearly flagged too! Time for a relaxing coffee at Paddington before heading for my train back to Highbridge.