Another early start following a fairly good night of sleep, but I awoke with a nagging toothache. These trips wouldn't be the same without their petty injuries and aches and pains which I'm sure are borne of the strange lifestyle I lead when on leave from work. I reckon a few weeks of living on the rails and I'd soon be rid of them. However, pressing business was at hand. First, a walk to Queen Street station with bags which seemed to be becoming more cumbersome by the day. Then to drink coffee and attempt to find provisions for what promised to be a long day.

In the end I need not have worried. Since acquiring four 170/3s from Hull Trains, ScotRail have dedicated them to the Glasgow/Edinburgh to Inverness corridor. So I had the pleasure of a ride along this very scenic line with a good buffet and a comfortable seat. All went well until the slow freight we'd been following decided to grind to a halt. We began to get progressively later until the freight was looped at Dalwhinnie and we were able to pass. Despite efforts to catch up, the last few miles of the route over Culloden Moor are not suitable for heroics, and we arrived seconds after the Wick train had left. It seems that despite ScotRail offering a service of only three trains in each direction per day with on average a five hour gap in service, Network Rail are still not convinced of the sense in holding a connection. Even when the likelihood of anything else being delayed on the line is at best, near impossible! The fairly rude and uncommunicative guard wasn't helpful either and I think I may have displayed my vexation to some extent. So on arriving at Inverness a casual enquiry as to when the Wick train left to a member of platform staff was met with a very firm and rather too hasty "you're to report to the DSM - I can't help I'm afraid" - the staff having clearly been told not to wind up the angry passenger any more!

In fairness, I cannot fault the helpfulness of the DSM and staff at Inverness. Road transport was quickly provided for the four of us left stranded, and when one particularly uncommunicative Thurso native explained he had a bike, a trailer was summoned to accompany the eight-seater. The road journey to Thurso and Wick was, in fairness, much quicker than the train. Over the years a number of road bridges have spanned the Firths of Moray, Cromarty and Dornoch while the railway has been left to wander its way around these natural obstacles. Once the coastal settlements of Golspie, Brora, and Helmsdale have been visited, the railway takes a swing inland into particularly inhospitable terrain before reaching the strange deserted outpost at Georgemas Junction, while the road clings to a more direct route. The run up the occasionally exhilarating and very twisty A9 was again an entertaining view I'd not normally get of the area, and despite being frustrated at losing mileage - knowing I'd be coming back by rail made life a lot easier and I was soon enjoying the journey northwards.

Not needing to call at any of the smaller outposts en route meant we got to Thurso long before the train. Our driver dropped a couple of passengers at the station where one intended to walk to Scrabster and catch the train back later - an interesting gent, who'd seen a fair bit of Scotland by rail using special tickets and rovers himself. We escorted another passenger to his hotel which gave me a chance to see the coastline of this northern extremity - certainly the furthest north I'm ever likely to travel on the mainland! I was the only passenger for the run back over the scrubby and desolate moorland to Wick, still arriving an hour before the train was due from Inverness!

I used the time available to explore the small town. Once over the Town Bridge, the whole place appeared to be constructed of dark sandstone or grey blocks and has an austere and gloomy visage. In fairness the slate grey sky and penetrating cold wind didn't improve the atmosphere. Not to say it wasn't a pleasant little place, but it had the perhaps expected appearance of rather isolated spot - I wasn't sure, maybe I was imagining the sense of remoteness as I'm prone to heaping all kinds of importance on place and topography. All of the major chains were here - a Somerfield, a Woolworths, a Wetherspoons pub, but it was interesting to note that local businesses former a far higher than average percentage of the high street stores than further south. Stepped into the Alexander Bain, a fairly good example of a Wetherspoons' house and had a pleasant meal and a pint. Decided to stock up on provisions for the rest of the day, and to head for the station. Arrived to find the curious little place deserted, except for the buffet trolley stewardess who was in the messroom eating her lunch. 158709 quietly ticked over, fresh from its exertions on the run from Inverness. Found myself a seat and settled in for the afternoon. 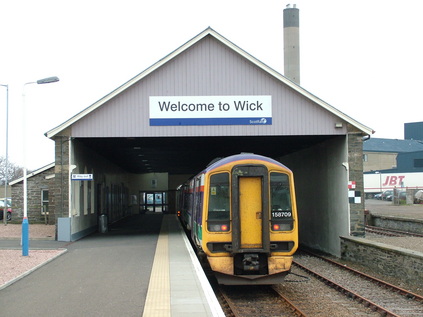 A quiet afternoon at Wick Station

The journey back was by turns stunning and mind-numbingly, unsettlingly empty. Sudden stunning views across the North Sea or into vast Highland valleys were tempered with long stretches of utterly empty desolation. Wick is the end of the line only nominally, as the Georgemas branch to Thurso is worked in a strange reversing manouvre which took us to Georgemas Junction station twice. The old days of splitting portions of the train here and sending them off with different locos doesn't seem so uneconomical in this light. It was a relief to my southerner senses to return to civilisation a little around the settlements of Tain and Dingwall. Soon enough, in a hazy sunset we arrived at Inverness where 67009 stood ready with the Sleeper to Euston. The station was busy with incoming services, and there was a comforting buzz about the place after the cold, empty north. Found a quiet spot in the Seated Sleeper and enjoyed a couple of pints of Deuchars IPA whilst I waited eagerly to see what route we would take and where the train would combine with the Fort William and Aberdeen portions. A day of mixed fortunes and lasting impressions.