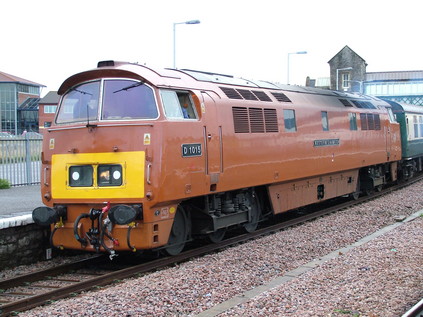 Once again, managed to slip out of work for a while for one of D1015s now almost regular visits to Weston. Arrived a little after 1100 to find Western Champion awaiting the departure of a unit from platform 2. A chance to get some shots, despite poor light and bleak skies. A fair turn out of enthusiasts for a weekday morning too. The 'Dunster by Candlelight' tour has become an interesting annual event now, but today was perhaps not quite the event which last year produced!

D1015 awaits departure on 1Z52, the 'Dunster by Candlelight' excursion

Bang on 11:11 D1015 thundered out of the station, leaving a trail of clag in its wake. Exhilarating stuff, and a reminder of why I go out in the cold when I could be safely tucked into my warm office! Other rail users have not been quite so lucky today.

Later, after another delayed Wessex journey home, I was wandering back from the Coopers Arms when I heard the tell-tale sounds of the Western passing on it's return trip. If I'd planned my times better I could have watched it pass Highbridge at speed. Still lots to get used to in my new location.