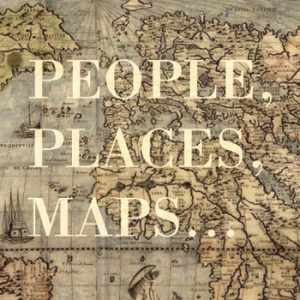 There are times when I wonder if I've done the right thing by trying to write about some of the music I stumble clumsily across. Of course there is always that fear that others have said it all before and better - but then I hear things which make me want to jump up and down and tell people to listen. That's exactly what I used to do in fact - but these days, the prospect of me jumping anywhere is a fairly alarming one, and there just aren't so many people around me who are interested in music. So this at least provides me with an outlet for those moments of enthusiasm.

First hearing People, Places, Maps... was just one of those moments. I was always going to be intrigued of course by a band with a name like that - my long-held conviction that music and place are intrinsically linked, all wrapped up in a single band name. It's perhaps a tricky name in some ways, awkward to write and hard to say quickly. But it sums up the songwriter's art, and the wide-angle range of this debut EP comprised seemingly of recent demo recordings. I've been listening to this for a couple of weeks now - mostly when on trains or walking around town - and the sense of movement and momentum in these songs is summed up perfectly by the title it seems.

People, Places, Maps... originate from Dunfermline - a place I know little about beyond once applying for a job there. Its one of those places I imagine, not unlike home here, where the gravitational pull of nearby large cities with their dizzying eddy of venues and oversupply of average bands makes getting heard a struggle. Credit then to this talented bunch for getting their music heard via this collection of songs which is freely available from their bandcamp. Kicking off with the melodic jangle of "Plans" which sets out the band's stall ably - assured and lyrical pop music with a deceptively catchy guitar line weaving in and out of the track until it reaches a noisy, life-affirmingly epic conclusion. Next up "Hotel Room" strides off with a nod to the tradition of Scots Americana which has always been done so well in the central belt. The emotional pull of the vocals harking back to the theme of place with the desperate sounding cry of "I walk down the same old streets..." as a well-placed violin joins the track. It's easy to do strings badly - too much, too often or just in the wrong place. People, Places, Maps... avoid this - deploying them where they belong to maximum effect. "Splinter" goes on to ground the band in the growing group of slick, professional melodic rock acts which Scotland is producing - alongside Make Sparks and Trapped in Kansas among others.

The stand-out track for me remains the wonderfully understated "Sarah's Song", starting with a gently strummed acoustic guitar and centred on a vocal duet, the song tackles the raw and difficult subjects of grief, powerlessness and remembrance. The violin returns in the company of piano to accompany the male and female voices which spin a truly affecting tale. With this subject matter, what is essentially a pop song could easily be clumsy and trite - but the band avoid this with an openness and honesty which seems to mark them out lyrically from other similar acts. If this bunch of songs are really just tentative demos put out to get the band heard, then this is clearly an act to watch carefully because the skill and sensitivity deployed on this small but near-perfect collection of songs is going to produce some remarkable results in future.

You can read an interview with People, Places, Maps... at Peenko.