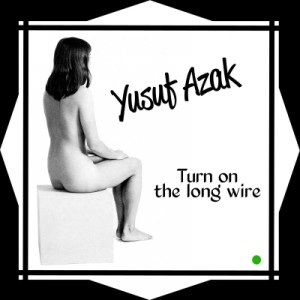 I had a conversation yesterday about people caring about what they do. In particular, about attending to the detail of things for their own sake, and not because they're trying to impress or influence someone else. It's a rare thing nowadays to find someone who is committed to something entirely because they see it as intrinsically valuable - and as I get older, more cynical and less forgiving, I see ulterior motives everywhere. Then, with almost embarrassingly perfect timing last evening, the Yusuf Azak record appeared on my doorstep. From the very outset this is about attention to detail and a sense of purpose. The packaging is remarkable - a carefully folded card sleeve, secured with a sparkly sticker. Inside a brief hand-written career summary from Yusuf is printed on crisp paper, lovingly folded around the disc itself. Unwrapping the CD was an exercise in anticipation itself. This is why physical product will always triumph over digital media, no matter how often I kid myself that for half the music I want to own I just can't get my hands on it without the internet.

And the music? The theme of studied craft and commitment to quality continues. Yusuf's breathy, urgent voice is unique - and it's near impossible not to become breathless in empathy as the voice soars and dives over the delicate guitar work. There is a genuine sense of event about this album - it sounds like a celebration of effort and workmanship over the throw-away culture which surrounds modern music. Occasionally the guitar is augmented by brief stabs or washes of strings - never overpowering and just enough to move the compositions forward as Yusuf's voice climbs through the range towards it's next joyful burst. Elsewhere, on 'Thin Air' the spirit of the Beatles' 'White Album' is invoked, and the lush orchestration carries the slightly picked guitar through a beautiful, multi-layered sweep.

The track which preceded the album's release (can I call it a single nowadays?) 'The Key Underground' is by far the closest that the record gets to a bona fide pop hit - and even then it's a soaring and swooning composition which has as much of a kinship with the Cocteau Twins or My Bloody Valentine as it does with Yusuf's folkier contemporaries.

As I listened, I knew I wanted to break my years of blogging failure and write about this record - but how? The lazy art of comparison is sort of redundant here and I'm entirely certain to make an utter fool of myself - but I was moved to think of fellow Glasgow musician RM Hubbert, whose sparse instrumental guitar masterpieces aren't a million miles from this. However, where Hubbert stays indoors to provide the necessary introspection and reflection, Yusuf Azak is up early and audibly gulping lungfuls of fresh air on cold winter mornings. This record has certainly arrived at just the right time of year. Highlights and stand outs are hard to pick so soon after first hearing a record, but I find myself returning to 'Christabel Blues' - perhaps the record's most straightforward singer-songwriter effort, but blessed with some dizzying guitar playing which forms into a sort of deranged blues. The song curiously, and rather sadly fades away all too soon - perhaps the only genuine criticism of the album being that it's too short.

If I find myself writing about something here, it's almost certainly wormed it's way into my listening habits in a fairly permanent way. I can't recommend this record highly enough - it's a gem of a winter album. You can get it here and no doubt eventually from the various digital emporia. However, this is one to own and cherish.