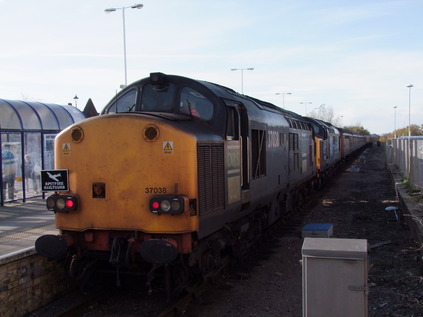 This trip caught me rather unawares! It had been a busy week, and occasionally a challenging one. I was readjusting to normality after almost a week away in Glasgow, and I had local things to tackle too. News about next week's trip was troubling too, and it looked to be shaping up as a long and somewhat awkward day. So, it was good then, not to have to drag myself half way across the country for the start of this trip. Few tours start on my doorstep these days, and it was simply a case of hopping on to the first train to Weston. Having met the local assembly who had travelled on the first running of this trip last year, we boarded the unit which got us to Weston in good time. Staff there seemed a little fractious about the tour picking up, and claimed they "hadn't been told" which sounded pretty unlikely. Over to platform 1 to watch 37038 and 37601 round the corner making a hell of a noise. Soon settled into a comfortable Mk II and heading north for York.

The route took us via Worcester and Droitwich, then avoided Birmingham New Street using the Camp Hill line. Despite not picking up at this metropolis, the train was very full indeed which was great to see. There was no new track on the outward journey at all for me, so I enjoyed a very sociable trip instead - catching up with veterans and locals alike. The pair of engines performed faultlessly throughout, and despite a few minor delays we cruised into York around 17 minutes early. Here a fair number of daytrippers departed, whilst a fair few additional passenger joined for the minitour to Saltburn. I last did this track on a 'lost weekend' following Pathfinder's cancelled 'Cleveland Cleric' tour back in 2008, and had never done it on a 'proper train', so the run to Northallerton, then via the rather forlorn and empty remains of Thornaby Yard to Middlesbrough was interesting.

Saltburn remains a fine little Victorian resort town, carefully laid out and mostly very well kept. Walked down to the end of town to get a picture of the cliffs and the North Sea beyond. The weather had turned out dry, cold and beautifully bright which seemed to suit the place well. As we waited for the stock to return after our short break, we got chatting to a local couple, curious about our train. They had lived in Saltburn for much of their lives, before moving to nearby Skelton. They described rough winters and an ever present wind here, but clearly loved the place very much - and were pleased to hear my thoughts on it too. Our stock was soon back in the small station, and we boarded for the run back to York behind 47500. This engine, recently renumbered to it's original identity after a spell as 47770 has only lately begun to work for West Coast, so it was good to have an opportunity to travel with it. The return route used the underpass near Northallerton which crosses Boroughbridge Level Crossing. I seemed to need this short section of line, so was pleased to be routed this way, when other tours have gone directly onto the mainline here. 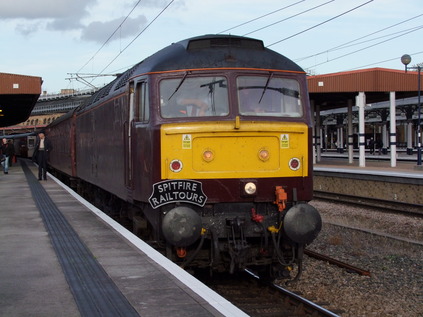 47500 having worked the train back to York
With a little under an hour at York, there was time to get some shots of the run around planned for our locos - first 47500 came off, and then the pair of 37s ran to the front, with 37601 now leading for the journey home. Back onto the train to find that somewhere in the process of reconnecting the train heat, things had gone wrong in our coach. With the alternator also not working, we were likely to have a dark trip back! No great problem though, and the lack of artificial light gave us some spectacular views of a stunning sunset as we sped south. Another very sociable trip with the chance to catch up with people which I don't seem to get on other tours. As we got back onto fairly local turf, I started to ponder the connection at Weston into the last train home. As long as we were allowed off Bristol before the unit things would be fine. However we were a few minutes down and this was all down to Bristol Signalling Panel - who have a track record of being fairly unhelpful to railtours arriving back in the evening. Sure enough, as we arrived the unit to Exeter via Weston was still at the platform. However, in typical style it was despatched first and we were doomed to follow our connection all the way home - but not to catch it! Brief but frankly unrealistic hopes it may have been sidelined at Bedminster or Yatton Down Loop proved fruitless, so the last chance was that it would be held at Weston to let us pass - in fact a brief rumour made the rounds that this would be the case. In the end this didn't happen, so we sent one of the ladies of our group to talk to station staff as they were likely to be far more persuasive! First Great Western staff were deeply unhelpful and wanted nothing to do with the handful of passengers stranded at Weston - despite simply having to let us board a following HST which is designated set-down only at Weston and stations to Taunton! They viewed the issue as one for West Coast, so after some persuasion and discussion with control it was agreed the tour would make additional stops at Highbridge and Bridgwater.

So, a quiet and uneventful day ends up with a surprise locomotive hauled trip to my home station. Once again Spitfire pulled a fine trip out of the hat which seemed to please everyone and certainly got plenty of seats filled. Credit too to WCRC for sorting out a silly situation with calm, logic and good old fashioned railwaymanship! Next week will be a much longer affair, but promises to be a good one...