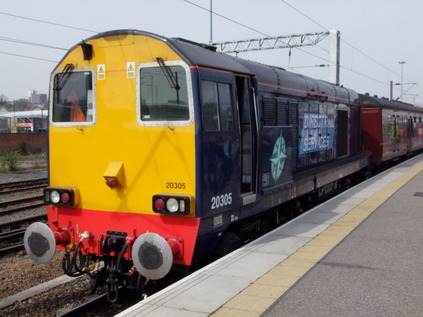 It's always been tricky to get to East Anglia, and that was reflected in today's early start which found me blearily trudging around Crewe station a little before 05:00. No hope of coffee at this time of day either, and with no kitchen car in the already complicated formation of the train, no chance of the customary bacon roll either. However, all miserableness was dispelled when the eerie silence of the station, which had literally only just opened it's doors, was broken by the racket made by 37423 hauling the stock in from the south. A quick check at the other end revealed that 37059 was leading a very tidy looking 20305. Found my seat with the usual configuration of faces scattered around coach K, and settled in for what was sure to be a fine day out. A bit chilly at first with no ETH, but I confess I also had the window wide open to listen to the locos. Once the sun started rise things soon warmed up however. The run out to Norwich should have been fairly standard stuff - down the WCML to Wolverhampton, then Birmingham New Street and out to Leicester. However, the first surprise - and indeed new track - of the day occurred when we took the connection to the Trent Valley lines at Nuneaton Abbey Junction. After calling at platform 5 of the 'old' station we took the recently restored connection to the Leicester lines. From here, the route is something of a stagger - and having the Class 20 in the line up limited our speed somewhat - however, the atmosphere on board was fun and the ale was already flowing, so I settled back to enjoy the sunshine and a line I don't often get to travel on.

20305 prepares to lead part of the train to Great Yarmouth

After a burst of activity at Peterborough with a busy series of sheds and sidings, we curved east again and headed for Ely. A brief reversal here saw 37423 take over, hauling a load of eleven coaches and two dead locos with ease - but making an impressive noise as it did so! Out onto the fens, and the long flat and straight stretch of line into Norwich. Here, things got complicated! Firstly, the train was to split - the Class 20 and six coaches would head for Great Yarmouth. Meanwhile, the 37s would top and tail the remaining five coaches, and would head north to Sheringham and the North Norfolk Railway. Spent the hour before this second portion departed getting some much needed coffee and reacquainting myself with Norwich station - since the last visit was so very brief! Soon underway again, passing Crown Point depot then taking the line north to Cromer. I'd done this branch once before on a quiet Sunday of an All Line Rover, but it seemed to slip by much more quickly without the stops. Fantastic weather as we reversed in Cromer, heading for Sheringham and perhaps the highlight of the trip - the traversal of the new 'occasional crossing' between the Network Rail boundary and the North Norfolk Railway. Amazed by the huge crowds at the station and level crossing waiting for us to pass, as we crept slowly through the centre of town and into the NNR's fine old station. A brief pause before we were off again, thundering along the coast towards Holt. On route we passed resident 31207, which the more dedicated among the passengers leapt to do to Weybourne as soon as we arrived at our destination. Contented myself with a wander in the sun and some pictures of the locos. 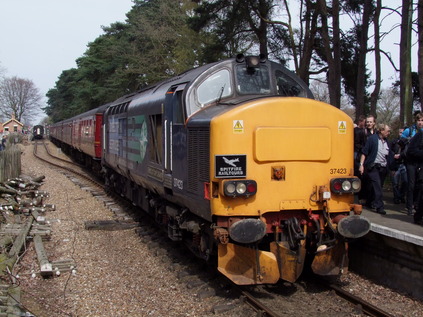 37423 arrives at Holt on the North Norfolk Railway
After a brief pause, we headed back to Sheringham and stopped at the platform on the North Norfolk Railway side of the crossing, the original station here. Whilst the stock cleared the station for an incoming steam service, wandered down to the sea front for fish and chips in the sunshine. A surprisingly civilised and traditional turn of events - but it was that kind of day. Contemplated the British seaside holiday for a bit too - before wandering back to the station, with members of the merry band stopping to purchase an unsavoury selection of items including oversize stale whelks, a carrier bag full of rock, and two ice creams. Arrived at the station to see a unit which had previously been declared a failure just leaving somewhat late. We left a little down, and made good progress as far as Cromer where we stopped to await the incoming service. The limited passing opportunities on the branch meant that the earlier failure was snarling things up further down the line, and we finally left about 14 minutes down. Nothing to worry about though, and an another enjoyable, rather sleepy run back to Norwich. 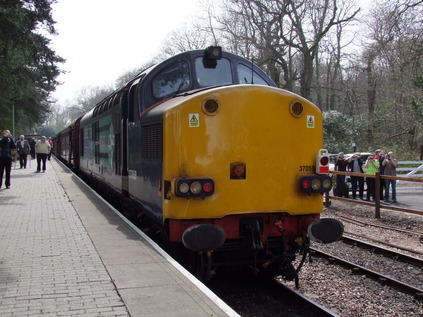 37059 waits to lead the train back to Norwich
Shopped for beer and supplies whilst the two portions of the train were shunted together again, with the Great Yarmouth portion arriving a little late too, due to brake problems on the coast. The train was soon shunted back into one though, and we set off homeward with 37423 and 37059 leading. The tour still had some track highlights in store though, as we were booked to use the avoiding curve at Ely. This unusual bit of track is signalled westbound only and avoids a reversal in the station. Duly ticked this off, and snoozed my way back to the Midlands, waking just in time to get the connection at Nuneaton in the opposite direction, traversing the crossings north of the station once again to regain the Birmingham lines. New Street itself posed an interesting spectacle too - we'd heard earlier that there had been a power failure both during last evening and this morning, and there were still problems. As we paused to set down passengers, the never particularly bright platforms were bathed in an eerie half-light from the emergency lamps. No displays were working, and people appeared to be wandering aimlessly about like some post-apocalyptic zombie film. Not sad to leave the station and complete our journey to Crewe, arriving a few minutes early, and very sleepy indeed.

Thinking back over my moans and groans earlier in the year about lazy tours which don't cater for the enthusiast, I'm amazed how ambitious this tour was. Trains aren't split and joined like this on the railway in 2010, and doing so was a huge gamble. The possibility of a number of ways of achieving the various trips seemed to work well too, with people reporting coaches arriving on time and the journey being pretty decent as road trips go. It's fantastic to see some risks being taken and some new ground being broken, and it's really good to see Spitfire silencing some of their critics with great itineraries like this one.