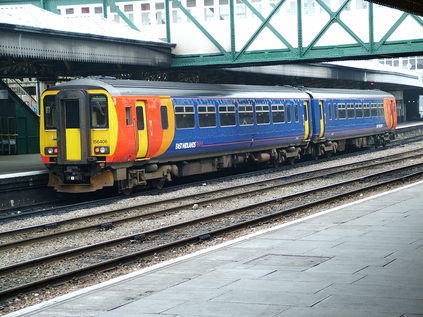 The Long Way to Leeds

I'm not sure if its the side-effects of planning ahead a little, or the knowledge of a fairly major weekend line closure looming, but the year seems to have opened with a surprising dash for mileage. I've been a little constrained by pre-Christmas engineering recently and it's good to get away to areas I haven't been to for a while. It's also interesting to play with some of the variations and new service which the new timetable brought with it. It's certainly one of the more dynamic shifts in service patterns for many years, and aside from some of the more high-profile additions (such as the Welsh Assembly Government bankrolled Cardiff-Holyhead service) there are some lower key but useful services appearing. One of these is the direct Northern Trains service from Nottingham to Leeds, with a variety of unusual routes and odd diversions on it's various runs to keep drivers' route knowledge up to date. Today's plan was to use one of these services end to end - the long wat around to Leeds.

Out on the usual early train, staying on as far as Temple Meads for the first time in what seemed like a while. Found much needed coffee and settled into the Voyager which soon arrived from Barton Hill. Spent much of the journey trying to get used to the various features of my new phone and enjoying heading north on what promised to be a fair but very chilly winter morning. Halted for some time outside Kings Norton before setting off via Selly Oak rather than the usual route through Camp Hill which these Manchester-bound services use to avoid a reversal at the congested Birmingham New Street. Frozen points maybe? A swift change here onto a busy CrossCountry 170 bound for Nottingham via Derby. Despite a few good-natured football fans, a quiet journey along routes I don't seem to travel much these days. Noted FastLine's 66305 waiting for a path at Lenton South Junction as we arrived into Nottingham. Here I had a couple of choices, and having looked at some of the known unusual routes operated by the Northern service, I'd opted for the 11:16 departure. This left an hour to wander into the city in freezing weather.

Back in good time to see the incoming Northern 158 arrive and find a seat. Whilst some of these services use routes around Toton Depot, this didn't seem to be the case with any of the Saturday services. Set out instead via Trowell and onto the Erewash Valley. A good few years since I came this way as I recall, and interesting with the foliage a little more seasonally sparse to see the remains of various freight locations and branch lines curving away from our route. A little new track for me, as we took the route avoiding the platforms at Chesterfield station - only recently redesignated as passenger lines. From here, we curved away from the main route into Sheffield, taking the 'old road' at Tapton Junction. Lost track of my bearings a little hear, but figured out where I was by the sighting of the stub of line at Westthorpe where our BLS tour reversed on route to Preston Docks. At Beighton we returned to passenger lines, arriving into the bay platforms at Sheffield for a reversal. Soon off again, via a bit of a meander through Barnsley, Wakefield Kirkgate and Methley Junction to Leeds.

After a quick wander around the freezing station, stepped out into the city and had a good wander around for the first time in years. Immediately on setting out I walked into a 'Free Palestine' demonstration of surprising size and volume. Ended up following the demo into the city centre, as did most of the youngsters out in the city. Perhaps they didn't understand the cause at issue, but they certainly swelled the ranks of the demonstration! I've always said that Leeds is a city where one should look up above shop-front height, and I remembered my own advice as I walked through street after street of remarkable and relatively unspoiled Victorian buildings. Also found myself furtively bus spotting, in search of my first Atheist Bus, a search which was finally rewarded through the filthy windows of a shopping centre bus stop!

Back to the station to stock up on coffee and board the 16:11 which took me all the way back to Bristol by a far more direct route. Settled in and relaxed for a comfortable and quiet ride, unfortunately mostly in the dark as the weather and evening closed in soon after leaving Leeds. A long and tiring day, but good to explore old route through new services patterns.