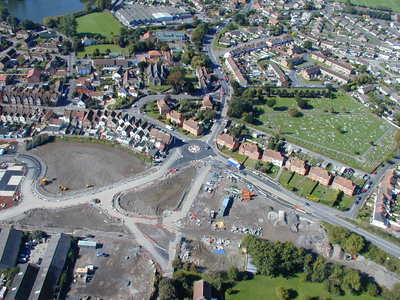 In a casual conversation with a work contact last week, we got to discussing Highbridge. He'd recently flown his Microlite Aircraft over the town, and had taken some photographs for colleagues concerned about changes to the road layout. When I mentioned that the development site was on my doorstep, he offered to share some of the images with me. The southern part of Highbridge from the air appears surprisingly green and spacious. Comparing the image below with the same site on Google Maps highlights the absence of the industrial units and bus garage which defined this part of town.

I notice too the intrusion of Newtown Lake into the top left of the picture. It's interesting that this represents a bit of Highbridge I rarely think of or see, which is shockingly close by when viewed from the air. What is even more striking is the size of the new development, and how it will dominate the town once opened in November.

A larger image is here.