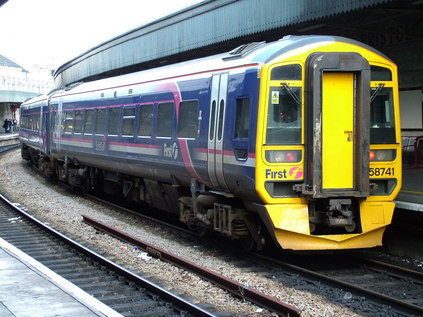 A day off work, fine weather and a bit of an event to attend. After a lazy start to the day, headed for Bristol on the 09:21. Noted a couple of fellow employees joining at Weston who appeared to be heading for the same event. Arrived with time to spare, which I spent drinking coffee and wandering around the station - something I haven't done for quite a while. Just after 11:00, went to platform 6 to register for my name badge, and enjoyed the hospitality on offer. Noted another First celebrity across the station, in ScotRail liveried 158741 which was heading for Brighton!

Highlight of the day was of course the newly reliveried HST set working from Paddington to Penzance. After a short speech and a fanfare, the set purred into the platform with MTU enginged 43004 and 43009 in charge. A brief speech from Alison Forster, MD of First Great Western and we were on board and heading for Weston. Lots happening once we set off, with magicians and a barbershop quartet on board! Plenty to eat and drink too. 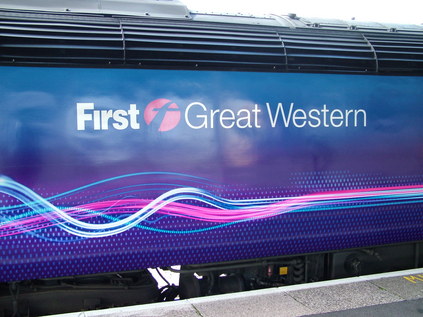 Other stations en route seemed to have joined in, and at Weston we had a welcoming committee of most of the station staff including the manager.

An enjoyable morning and a good show by First. Would have stayed on longer, but I suspect that it might have become quite crowded later in the journey. Noted later that the first weekday of the franchise had been plagued with short formations and cancellations. First have lots to do - if they throw as much effort into fixing these issues as they did into today's celebrations, we should see some changes soon enough. 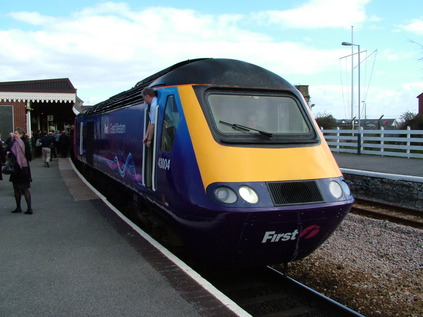