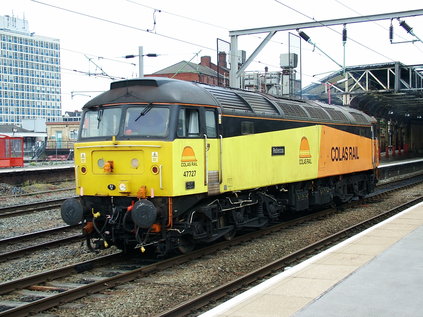 A Surfeit of Spoons

I'd wondered what to do to fill the spare time I'd have at Crewe today. As it happened, I need not have worried. In fact the station was much busier than its been for some years during my visits. Firstly, as I arrived 47727 was waiting to head for the Carriage Sidings with a line up of electric locos painted and prepared for export. Despite making the dash over to platform 12, missed them by seconds. Managed to get a picture of 47727 as it briefly revisited the station on route south.

After bringing in a convoy of electrics, 47727 prepares to leave

Class 47s were much in evidence with a large number of Riviera's locos stabled on the Diesel Depot, and 47805 shunting stock - including a generator van and kitchen car destined for tomorrow's tour! Just when it seemed rather like the Crewe station of old, a further Class 47 drew into the station on a Carnforth-Norwich ECS working for a trip tomorrow. After a brief pause, the engine roared into life and took the rake towards Stoke. 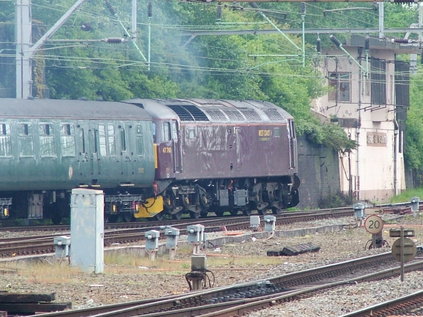 47760 heads for the Stoke line with ECS bound for Norwich

A few more light loco movements were topped by the convoy being tripped from Gresty Road to the Heritage Centre for static display at their gala tomorrow. An example of classes 20, 37, 57 and 66 lashed together and after a brief stop, powering out of the station with the 37 leading. If I hadn't such an early start, I might have stayed up for the line of class 57s coming from Wembley. As it happened, it was cancelled and ran very much later. Resolved to see this tomorrow, and to get some sleep.